Body Image, Love & A High Court Battle for Truth: New Memoir by Beautiful Girl Who Lost Legs Beneath a Train


LONDON: May 5 2015 STOP PRESS Diana Morgan-Hill will be interviewed on ITV TV's THIS MORNING show with Phillip Schofield and Amanda Holden at appx 10.45 tomorrow morning, Weds, 6th May.

LONDON: April 23 2015 A beautiful girl suddenly loses her legs: in 7 seconds the tall, glamorous young businesswoman goes from busy woman of the world with everything to live for to double-leg-amputee, her life in ruins. Then it gets worse when she reads in the Press that the Transport Police want to interview her with a view to prosecution for trespass onto their railway line. 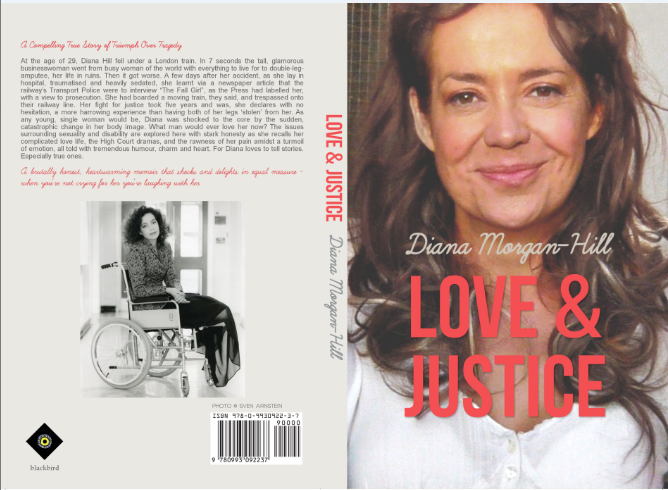 “A compelling story of how humour, friendship, grace and sheer grit can triumph over unthinkable catastrophe. Diana Morgan-Hill's unflinching memoir is proof that what does not kill us makes us strong.”

Liz Jensen, Author of The Ninth Life of Louis Drax


Love & Justice by Diana Morgan-Hill, launched on 23 April, is the true story of a young woman's recovery, return to success, and search for love amidst fierce High Court battles with an uncaring corporation, told with heart and humour.

At the age of 29, Diana fell under a London train and lost both of her legs. Once the threat of prosecution for trespass had been withdrawn, and whilst still adjusting to life without legs, Diana found herself in the midst of a lengthy legal battle for compensation and the truth. Her fight for justice took five years and was, she declares, a more harrowing experience than having both of her legs ‘stolen’ from her.

As the Brazilian Paralympics draws closer, the issues of sexuality, disability and body image, portrayed in this first-hand account which focuses on her complicated love life and her court battle, will become increasingly relevant.

A brutally honest, heartwarming memoir that shocks and delights in equal measure  – when you're not crying for her you're laughing with her

ABOUT THE AUTHOR Wheelchair Tennis athlete Diana was a finalist in Dancing on Wheels, the BBC spin off wheelchair version of Strictly Come Dancing. With her dancing partner, swimmer Mark Foster, she competed in a dance-off against this year's Strictly Come Dancing champion Caroline Flack and her dancing partner James O'Shea. Diana later wheelchair-danced her way through the London 2012 Paralympic Games Opening Ceremony and tangoed with Boris Johnson in front of County Hall (photos available). In 2003, as CEO of the Limbless Association, Diana was instrumental in helping Iraq war orphan and double arm amputee Ali Abbas, and other Iraqi children, by setting up the ALI Fund. She also launched the charity's Help Bureau, Legal Panel and the Prosthetic and Orthotic Awards, which are still held every year. She now supports the Arvon Foundation, a charity for new writing, and continues her work counselling victims of sudden amputation.

Diana, raised in Wilmslow, Cheshire and now from Poole, Dorset, is a motivational speaker and has appeared on numerous TV and radio shows including BBC TV’s Breakfast Show,The One Show, LBC and BBC Radio Solent. She will be talking at the Anglo/French Charroux Literary Festival on 27, 28, 29 August 2015 (patron Susie Kelly) alongside authors Kate Mosse, Elizabeth Haynes, Jacqui Lofthouse, Alison Morton & Barry Walsh amongst others. This, her first book, publishing in ebook and paperback ISBN 9780993092237, is a joint winner of the One Big Book Launch 2015 initiative for new authors. (Wed 3 Jun 2015, 6:00pm Free Word Lecture Theatre, London.)

Posted by Stephanie Zia at 6:41 AM